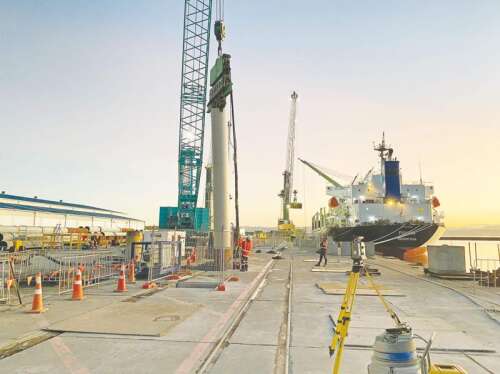 The Port of Eastland had a strong start to May, loading nearly 80,000 tonnes of logs onto four ships while skirting weather delays. By the end of the month, 184,369 tonnes spread over eight ships had been exported from the regions. The port also received one last shipment of kiwifruit before the end of the season. “We have 11 ships booked for June, so hopefully the weather will be stable for a solid month,” a port spokesman said. “The port has been a hive of activity with the arrival of the tug Maki and the start of piling of Pier 7. McConnell Dowell’s new drill rig will begin installing two or three concrete piles each day for approximately four weeks and will resume the installation of the steel piles in early July. The log boat Paovosa Wisdom III was due to finish loading today and will be followed by the Hoihow, African Heron and Luchow. These three were at anchor in the bay this morning. The McConnell Dowell construction team are pictured using a specialist hydraulic hammer to drive in new piles for the wharf reconstruction. Photo provided

GREAT SHOT: The port had a busy May with over 184,000 tonnes of cargo handled, mostly logs with kiwifruit loaded and shipped. The McDonnell Dowell construction team continues work on Pier 7, here using a specialist hydraulic hammer to drive the first of the new piles for the rebuilt pier. Photo provided