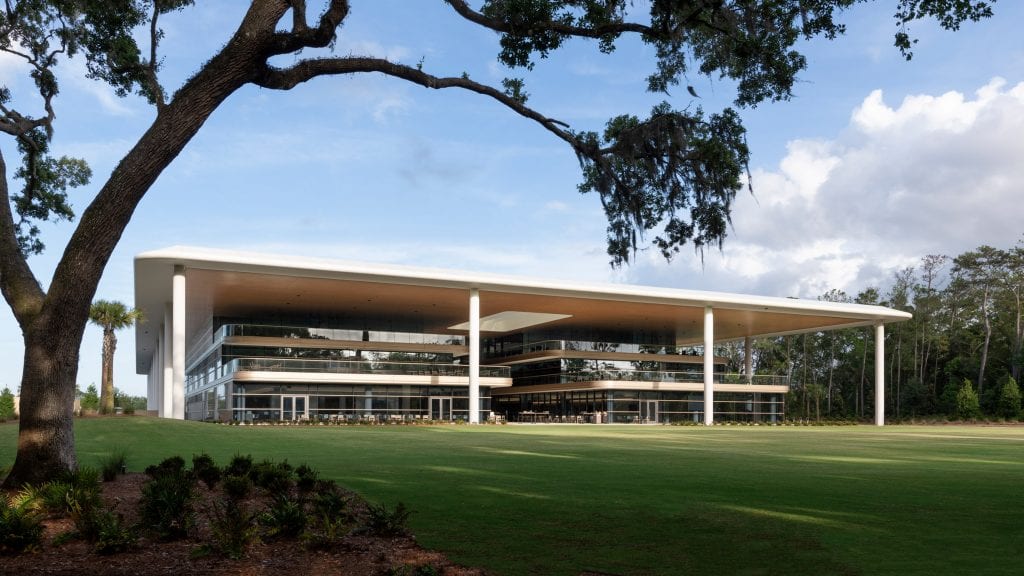 British studio Foster + Partners completed an office building for the PGA Tour in Florida, which was topped with an oversized roof.

The PGA Tour headquarters were built near natural wetlands next to the Ponte Vedra Sawgrass golf course, which hosts the Players Championship each year.

The 187,000 square foot (17,373 square meters) building for the PGA Tour, which hosts professional tournaments for male golfers in the United States, contains a collection of three story structures nestled under the large roof.

Located next to a newly created lake, Foster + Partners explained that nature played a key role in its design.

â€œOn our very first visit to the Sawgrass site, we were inspired by the quality of the landscape, the interplay of light and shade and water,â€ said studio director Nigel Dancey of Foster + Partners.

“This led to our very first sketches, maximizing light and views under a generous overhanging roof that creates shaded outdoor terraces and room spaces.”

The building was built on a raised floor designed to protect and sustain the head office without limiting the flexibility of its internal spaces.

Extending from the raised floor, large white columns stretch the height of the structure and support its wooden veranda roof.

The three-story internal structures are wrapped in glass facades to let natural light into the office spaces, while providing views of the surrounding wetlands. 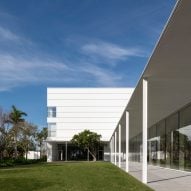 Foster completes “revitalization” of the Norton Museum of Art in Florida

The blocks are connected by six-meter-wide bridges that aim to encourage meetings and gatherings outside of traditional offices.

The terraces along the office spaces extend around the perimeter of the internal structure beyond the atrium to an outdoor area, covered by the roof of the veranda.

Five large dormers have been placed on the wooden roof of the atrium and reflect the curved rectangular cutouts between the decks and stairwells.

At the rear of the building, Foster + Partners has placed a gym and cafe on the ground floor overlooking the green landscape of the nearby golf course.

“By working closely with the fantastic Tour team, we have collectively delivered a building that will allow the Tour to flourish and nurture its talent.”

“It was an incredible opportunity for us to realize a comprehensive vision – from the general orientation of the building to the interior finishes and details.”

The studio recently unveiled its Apple Tower Theater store in an abandoned 1920s cinema in downtown Los Angeles and announced plans to turn the site of a decommissioned power plant in San Francisco into a mixed-use development.

The photograph is by Chuck Choi.